If you are having trouble using the system, please try our help guide.

2.1 The Black Country forms a distinctive sub-region on the western side of the West Midlands conurbation. It has a unique economic history, settlement form and topography and is very much a product of its industrial past. The four local authorities have a shared set of social, economic and environmental challenges and have found it effective to tackle strategic issues on a cross-boundary basis. The authorities have worked closely together for 14 years to establish a clear and shared set of ambitions and directions of travel, expressed in an agreed economic and spatial strategy. This joint working has strengthened and deepened over time – moving from establishing a 30 year Vision in 2003, to adopting a joint Core Strategy in 2011, to securing funding through the Black Country LEP and the West Midlands Combined Authority in 2017 to deliver priority projects.

Figure 1 The Location of the Black Country 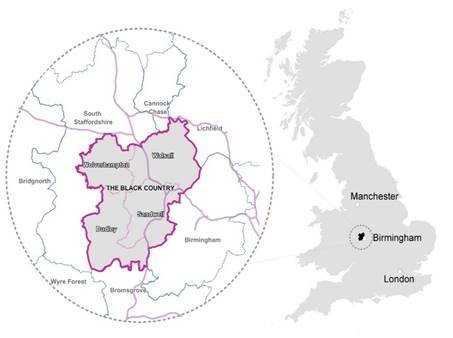 2.2 The Black Country is a significant area with a large and diverse population of 1.1 million, and faces a number of challenges. The Core Strategy ambitiously aimed to meet these challenges head on - stemming a declining population by regenerating the urban core and delivering housing growth; revitalising declining industrial areas and creating modern quality employment land; strengthening centres; creating stronger public transport networks; and transforming the environment and image of the Black Country.

2.3 The Core Strategy set out a vision based on three major directions of change:

2.4 The Key Diagram below illustrates the Spatial Strategy for the Black Country. The four Strategic Centres and sixteen Regeneration Corridors together make up a Growth Network where growth, regeneration and land use change is to be concentrated over the plan period – delivering two thirds of new housing and over 90% of new employment land, retail and offices. The Growth Network is served by an extensive transport system and therefore provides the most sustainable locations for economic and housing growth across the Black Country although significant improvements are still required to improve connectivity and accessibility. The growth network covers the parts of the urban area with the best access to infrastructure and services, and those areas most in need of regeneration. 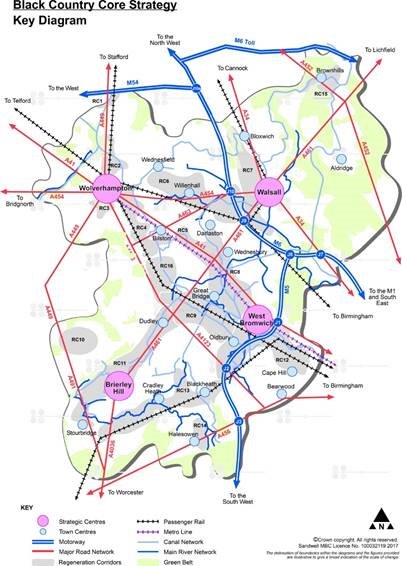 2.5 Local Plans have now been prepared to allocate the sites needed to meet the targets in the Core Strategy. The majority of land required to meet development needs up to 2026 is focused within the growth network, although the level of concentration is less than anticipated. One reason for this is that more windfall sites have come forward than expected outside the Growth Network e.g. through disposal of surplus public land. However, another reason is that there is not as much surplus employment land suitable for housing as anticipated. This is partly because the economy has strengthened and local firms are more robust than expected and partly because sites are more affected by constraints than expected.

2.6 The existing Core Strategy was prepared against the backdrop of a global economic recession which significantly affected the Black Country economy and slowed the delivery of regeneration for a number of years. However, since 2011, development rates and confidence have significantly increased, supported by public sector investment and the certainty provided by strong local plans - and the Core Strategy policies have started to take effect.

2.7 The following section summarises delivery of key elements of the Strategy in relation to employment, housing and transportation infrastructure. 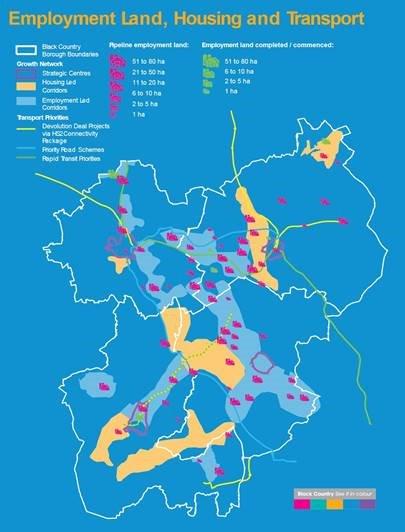 2.8 Map 2 above illustrates the delivery of the Core Strategy so far in relation to key employment sites. This shows both completed developments and projects in the pipeline – and the extent to which the Plan has been successful in steering development proposals to within the growth network. The Black Country has secured notable successes in delivering high quality employment land, including the i54 business park which has attracted international companies such as JLR and Moog. Significant improvements have been made to regenerate key urban centres such as West Bromwich’s New Square, retail, office and housing development in Walsall Town Centre and Wolverhampton’s new transport interchange, Mander Centre refurbishment and new Grade A offices at the railway station. 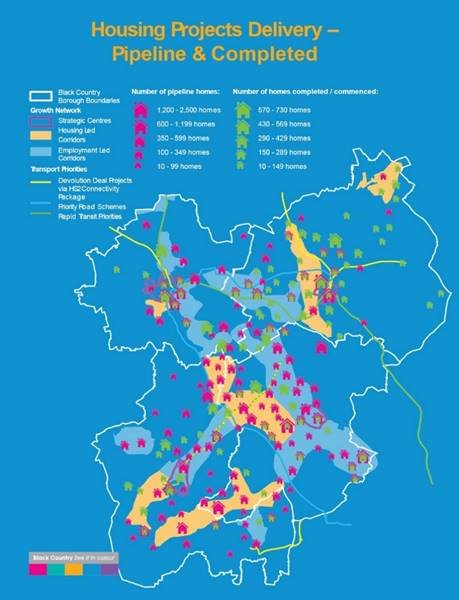 2.9 As in most parts of the country, the recession had a marked effect on the rate of house building across the Black Country and reduced the appetite for higher density schemes. The housing trajectory, measured against existing Core Strategy targets, (Appendix B) reflects this dip, which has resulted in the Black Country currently being 3,000 homes behind the Core Strategy target. However, up-to-date SHLAAs demonstrate that the sub-region should be on target again by 2017/18 and that an adequate supply of housing land is available to comfortably meet the current 2026 target.

2.10 This does conceal a delivery challenge which is also illustrated in Map 3. There is a large pipeline of major housing sites, concentrated within the Growth Network, which have been successfully allocated through Local Plans. However, many of these sites have multiple constraints and financial assistance will be needed to bring them forward.

2.11 These sites include 300 ha of occupied employment land which has been allocated for housing. This approach brings issues of viability due to the costs of land assembly, business relocation and land remediation. Significant amounts of external funding are now available through the Black Country LEP and the West Midlands Combined Authority to help tackle these issues. However, this is not sufficient to cover the costs of compulsory purchase, which may be necessary on many sites to ensure delivery by 2026 and would significantly increase gap funding costs to around £1.5m per ha. Looking at past trends, 300 ha of employment land is the quantum that should become vacant and available for development through the process of natural wastage and building obsolescence between 2016 and 2036, the end of the new Plan period. Therefore, if the delivery period for these sites was extended from 2026 to 2036, compulsory purchase should not be required.

2.12 Many of the transport priority improvements identified in the Core Strategy have been delivered or are committed for delivery in the short term:

2.13 In summary, the Core Strategy Spatial Strategy with its focus on the Growth Network has proved to be effective. It serves the Black Country well to take into the review and many of the challenges that faced the sub-region in 2011 remain. The next Part of the Report sets out the new challenges and opportunities which the review needs to respond to.

If you are having trouble using the system, please try our help guide.
back to top back to top